The History of Warped Tour

Since 1996, The Vans Warped Tour has been a summer retreat to countless successful bands, solo artists and even a stage dedicated to local bands in whichever towns that they landed in that day.  The Warped Tour was conceived by successful promoter, Kevin Lyman.

Before settling on the name “Warped” for his very first tour, Lyman, was to announce that the tour would be called “The Bomb.”  In the 90’s, “bomb” was a popular term meaning, something cool.  The same day the announcement was to be made, America was stunned by The Oklahoma City Bombing.  Lyman decided that the original name would be too disrespectful and borrowed the name “Warped” from a magazine that he had worked for in the past.

The first Warped tour was actually launched in 1995 but it was not until the following year that Vans stepped in to become the primary sponsor of the tour.  The first effort at the tour consisted of mostly “eclectic alternative” bands – think, Deftones, No Doubt and Sublime.  It wasn’t until Vans stepped in that Lyman shifted his focus to feature Punk Rock bands. 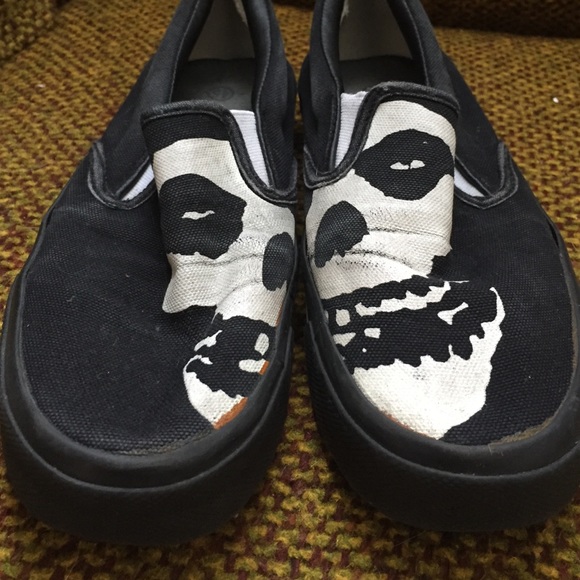 Today, The Vans Warped Tour is the largest traveling music festival in the United States.  That fact may seem surprising but with 80 acts per day and 950 people that travel with the show to keep it afloat, it’s no surprise that this tour gains so much attention.

Sponsors – What Could Have Been

Vans began manufacturing shoes in 1966, in Anaheim, California.  It didn’t take long for skaters to appreciate Vans rugged style.  By the end of the 1970’s Vans were being represented in full force by skaters and BMX riders all over California.  They became a sponsor to this type of athlete and eventually opened their own skate park in 1998. You may have noticed Vans iconic black and white checkerboard shoes displayed by, Sean Penn in “Fast Times At Ridgemont High.” With Vans’ affection for extreme sports and how Punk Rock went hand in hand with these sports, there may not be a better fit for a sponsor of this tour.  Kevin Lyman disclosed in an interview with Billboard.com that the sponsor for The Warped Tour was almost entirely different.  Kevin and his crew were scheduled to meet with Calvin Klein, to talk sponsorship.

It just so happened that there was a blizzard in 1996 that caused the Calvin Klein representatives to be stuck on the runway for 24 hours.  During that time, Lyman received a call from Vans and the rest is history.  The Calvin Klein Warped Tour just doesn’t have the same ring to The Vans Warped Tour.

Kevin Lyman gained his experience in tour management during, Lollapalooza in 1992 where he was stage manager and even shared responsibilities with the assistant production manager.  It was there that Lyman realized that a tour cannot be planned half-heartedly.

He focused his full attention on planning for what has become The Vans Warped Tour.  To this day, he will only take a few weeks off after the tour wraps up but then picks up planning for next year in September.

One of the most exciting things during the Warped Tour is the schedule, it changes with every city.  Lyman says that during Lollapalooza, he witnessed talented bands play to empty seats because the fans knew what time the main attractions would be taking the stage.  Lyman writes the schedule before each show and has noticed that nearly 90 percent of the fans arrive as soon as the gates open.

So where do you find what time your favorite band will be playing?  You can buy a schedule from nearly any kiosk or you can just look for the giant inflatable board that boasts the lineup!

One of the fan favorite events at The Vans Warped Tour takes place on The Ernie Ball Stage.  This is where the bands that are involved in the Battle of the Bands perform.  This stage gains a local band a ton of exposure and their talent is judged by professionals from the music industry.

Another super cool tradition that The Vans Warped Tour offers is the BBQ band.  The “BBQ band” agrees to prepare the post-show BBQ dinner for the other bands and crew in exchange for the chance to perform on the tour.  The Vans Warped Tour is well-known for giving smaller bands big chances to make a name for themselves.  Some of the artists that recognize the tour as their big break include: Blink-182, My Chemical Romance and even Katy Perry.

For the most part, the bands that perform on The Vans Warped Tour do it for the love of music and to support the many causes that The Vans Warped Tour stands for.  It is not out of the ordinary to see the singer from your favorite band in the mosh pit for one of their friend’s bands.  Nor is it odd to buy a band’s merchandise from an actual member of the that band.  It is typical to see members of the band working their own merchandise stands.  You would be surprised at how easy it is to get an autograph, picture or just some musical advice from most of these artists.

Do yourself a favor and check the upcoming schedule of The Vans Warped Tour.  If it is coming near your town, it is most definitely worth a visit.  The family vibe between your favorite bands and even your fellow fans is an overwhelming feeling that will leave you with an incredible sense of satisfaction.  Tickets are typically under 50 dollars.  Where else can you see over 80 live acts, rub shoulders with your favorite artists and create lifetime memories for under 50 dollars?

How to Travel Without Destroying Your Guitar/Ukulele
April 27, 2016